January 4th The first week of the year!

This week was really slow. Because what happened here is that EVERYONE has a house here for the year...but when it is break for christmas everyone will go to the beach in Tibal. Where they all have another house. A vacation house. So this week it was a miracle that we had lessons. Let alone having one person at church with us...But for some reason I feel all that much closer to my companion and the sisters living in my house...And what a blessing it is to be able to talk and live with them! And do things with them!


I hope you all have had a great new years! And have lots of new years resolutions! Mine is to really excersixe every day this year. And its started out great! Every morning but sunday 6am! WHOOT WHOOT! Just remember that new years resolutions are a great way to start the year! Just dont forget to add one physical but also with things spiritual too! And remember that if you mess up...just keep trying no one is perfect and that is why we have our Savior Jesus Christ who died for our sins and for our mess ups and mistakes. And because of him we can try better every day! it is because of him that we have this opportunity. I am so greatful for this! Thank you so much for your support!
I love you all!

Until next week!
Sister Thomson

photo - a christmas present for a recent convert in Sousa! a small knife set for her house! 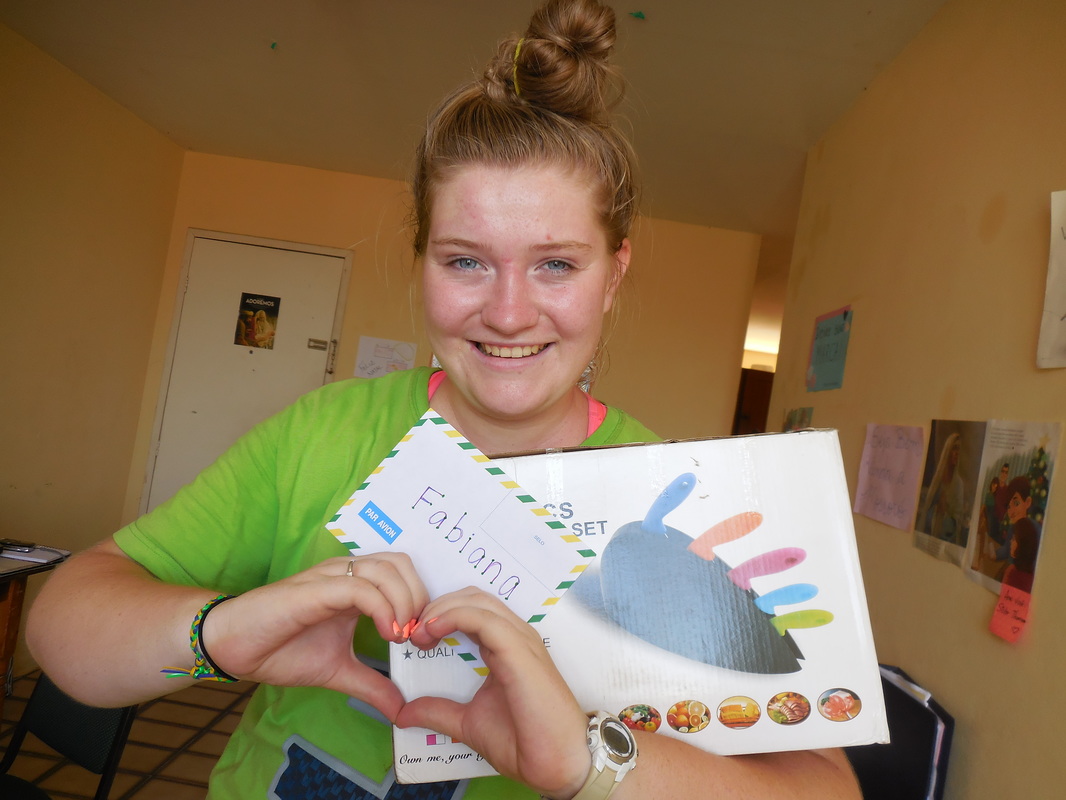 ​So this week was really long and at the same time really short.

Then I had a pretty cool supise! My super hero dad gave me flowers for my birthdya sunday! But it was really cool because Brad called us and asked where we were...we were really far in our area waking up people to go to church...And he just asked where we were. And then hung up...and I thought it was becasue the bus would not pass by and he was send to help us bring people to church...and then he called again...and when his car got there I saw the flowers and started to cry on the street. And Now i am looking for a way to preserve them! they are so beautiful! But I was not expecting them...so I didnt even do my hair or put on makeup (I know grandma B is gonna kill me for that one...but I love you) Heck i wasnt even wearing great clothes...but thats okay...and then to finish my birthday I was stuck in the stake center with the elders for 2 hours waiting for a meeting. That never happened. and then when I got home Sister Lerner and the others were planning a suprise party...which was really nice! Now I wast to do something cool for them! Especially Sister Lerner...because I know I was a pain yesterday and she was trying so hard to keep me from our house...haha :) WAY TO GO HOUSE! LOVE YOU GUYS SO MUCH! best party that I have had fora da casa! (comparable to the party that brie threw that one time...ha....ha ha...ha...)

So that was my week!
Love you all! Thank you for the birthday wished!
Xeiros!
Sister Thomson

This week we had a lot of help with our house. I cannot even explain all of the problems that happened in our hosue but I think we are going to make a movie about it. the sink broke. The toliots dont flush. The is green and black mold. the sink is leaking into the wall and making more black and green mold.


And the beginning of the week was this stressful mess of the house. And the week continued like that.
The Bishop´s son was baptized and it was the COOLEST baptism and birthday party that I have ever seen! They invited all of their friends that werent members to come to the baptism and after had a big reception. I mean this baptism for this awesome 8 year old was bigger than most weddings that I have seen! It was LEGIT! and now I am already planning the baptisms of my children! I think I want to do something similar. Because it gave the opportunity to a lot of people to get to know the church! WHAT A GREAT IDEA! :)

And it all came crashing down on Sunday. The BEST OF THE BEST! (you can take that how you want to) We woke up and left the house a little late to wake everyone up to go to church. Got to Sayonara´s house and woke her up. Half an hour in front of her house yelling into the door because her daughter with 3 years was telling us she was at home but then she came up from behind us. But then she got ready for church and her daughter didnt want to go. So we got her ready and when we were returning to her house, her mother in law was walking to her house. yelling on the street and we were about 50 paces behind her and took off sprinting becasue I KNEW she was gonna rip into Sayonara for going to church. So it was like a film. I was running and behind me was sister Lerner. and behind us was 2 more investigoators. SPRINTING. and The mother in law and I got to the house at about the same time. and she was yelling and I think she was cursing us or the house...really I didnt understand because she was talking REALLY weird. and she dosent have any teeth...but we tried to talk to her about the church but she wouldnt listen. And Sayonara said that it would be better to just leave. So we all went to church and I told Sayonara that we would come back home with her to make sure the mother in law wouldnt do anything (becasue she has already threatened us and Sayonara is pretty scared of her). But Sayonara went to church. Was Baptized. and when we wnt home with her no one was waiting at her home. But we went to talk with her mother in law who yelled at us some more. But in the end gave us a hug and said ´´vai com Deus´´ . So I think it will all be alright with her. She isnt going to like that Sayonara is going to church...but one day she will go too! (right now she is going the the Assembly of God........)

Lesson for this week: NEVER EVER EVER GIVE UP! Even when you want to! Benjamin Franklyn said once ´´when you get to the end of your rope, tie a knot and hang on´´ and that is EXACTLY what we need to be doing!

Music for the week: When I see you again (dont know if this is the title...or who sings it...but I heard it on the street this week and it is SOO TRUE!)

Love you all. have a great week!
Sister Thomson

this week was really cool. there was a lot of rain...and rain here is A LOT different than in Washington...or in the United States...There is a saying here ´´tomando banho de chuva´´ which is more or less taking a shower in the rain. And that is exactly what i did...took a shower in the rain...But because of this the work was really slow. No one was at home and the people that were at home didnt want to talk to us. But the coolest part was that there was a RIVER in the road. and we had to cross it. The water was brown and there was no way around it. So we hiked up our skirts. held hands...and crossed the NASTY water screaming because of the frogs and other things in the water. But it was really cool! Other cool thing! I am starting a collection of coins from Brazil of the olympics! I am excited for them...coming up soon!